Yellow Pages - How to break free 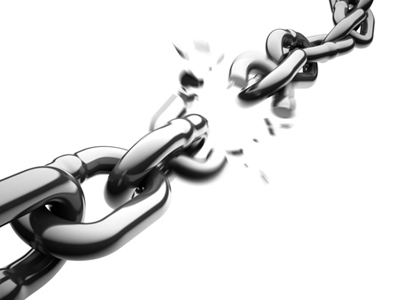 Moving your budget out of the yellow pages and into an online internet marketing strategy can be more difficult than you might think. Often times the problem is not making the decision to eliminate some or all of the Yellow Pages, its how complicated it becomes dealing with the Yellow Page company.

It is not uncommon for a “Key Account” or “Major Account” with the yellow pages to be spending 50-200K in advertising expense. That money is often times spread across a large number of different products that don’t all have the same expiration date. This can cause difficulty in deciding how, when and where to make the break.

In addition, the Yellow Page companies are typically very aggressive in their tactics once they discover that you may want to reduce or cancel your budget with them. It is not uncommon for them to show up with 3 or 4 so called “subject matter experts” to inundate you with reports, facts, spreadsheets and a plethora of numbers to get you to continue with their “auto renew” contracts.

Let us discuss two questions in this article.

We work on a regular basis with Yellow Page advertising customers who want to make a change but just seem trapped in the contracts with the YP company. They rarely understand completely what they are buying and more often than not have no real understanding of a basic ROI.

A good place to start is to use a real example regarding how to first decide whether or not to reduce or cancel your advertising. To start out let us consider some basic industry standard numbers you should keep in mind when evaluating your YP spend.

Start here: How much money are you spending and what are you spending it on? This question in and of itself can often create a whirlwind of energy with the YP company just to get it figured out.

Next: Determine on an ongoing monthly basis how many new customers you receive from the products you are purchasing from the YP company. This again, will be a difficult task. It’s really important because these companies rely upon the fact that you really don’t know and when it comes time to renew they can throw up enough mularkey against the wall to get you to renew for another 12 months. Don’t renew any more until you have a good basic understanding of how much money you spend versus how much money you receive in return.

Here are some basic fundamentals to keep in mind:

What you sell needs to be multiplied by 20%-30% to establish a basic profit amount. In other words if you sell $100.00, you probably only made in profit 20 – 30 dollars. And that is likely overstated and more than a fair evaluation to the YP company.

If it did not produce a reasonable PROFIT in the past 12 months, buying more is not the fix you are looking for.

The reason it is important to understand this is to take a look at the Dashboard(s) with one of the YP companies. These dashboards belong to a client of ours and it is really important that you understand the claims made here and the reality of these numbers.

First of all take into consideration that this client is spending a whopping 100K with a YP company. That’s right one hundred thousand dollars. They did not become aware of that total figure until they started to question the costs and the ROI. Let’s take a look at three components of a typical bundled program as sold by the YP companies. 1.) Print Yellow Page advertising. 2.) Online directory yellow pages. 3.) Clicks package

Take a look at the dashboard report for the yellow page print for the period of May, June and July of 2014. In looking at this data keep in mind that during this period the advertiser paid for the print portion about $11,583.00 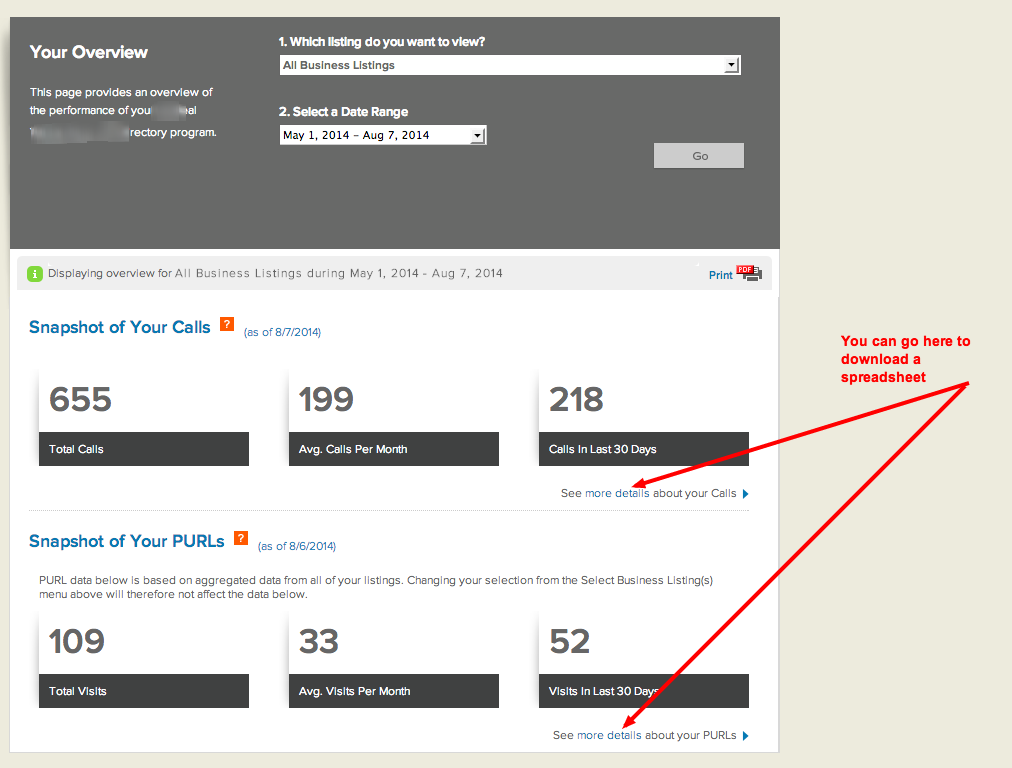 What you see here is a flat report stating 655 calls for the period from all sources in the print product. Without due diligence this looks like a pretty good number. I mean it shows almost 200 calls per month or almost 50 per week or almost 10 per day! But take a close look and break it down. Once we downloaded the spreadsheet and began to break it down a whole new picture came into focus. What I recommend is that you first sort it out and take out all calls under 30 seconds. Or you can decide for yourself what a real call is based upon time. In this instance a real call that might possibly end up in an order would require an absolute minimum of 2 minutes. But we are trying to be very fair here. In this case taking out the less than thirty seconds calls reduced the number to about 400 total calls for the period. Next we sorted the remaining calls into duplicates.

There were actually several duplicates, triplicates and even greater. After we removed these down to the legitimate calls left the number was down to 228 calls for the period. Last we took the 228 calls left and did the very best that we could to give every benefit of the doubt to the YP company. After all, we were seeking real numbers. This was not an effort to disparage anyone. In that effort we have not been able to match names, cell phone numbers, dates or every other field on this report to more than 20 total customer sales. And that was after a very time consuming effort comparing every call to our customer database, daily call logs and anything else we could to validate the amount of money actually sold. In the end no matter how we tried the amount of money sold here was about 20 customers multiplied by an average customer worth of $420.00. A grand total in sales of $8400.00 And as we stated earlier, that number still needs to be a profit number not a sales number. So even in this case if that number were 30% (it’s not) the total profit generated here looks like $2520.00

Let’s now move into the online directory for the yellow page company. For cost we will have to combine this screen and the last two screens as a total cost for online product purchases. We were not able to get a good breakdown of charges by the company. So by going off of the bill the total digital/internet costs for the period of May, June and July 2014 is about $13,251.00

Keep the following in mind. On the online directory they have calls and clicks. On the clicks dashboard they call it leads that are clicks to a sort of landing page that can lead to form fills, emails and SMS. In this case, there were only clicks counted as leads. No form fills, emails or SMS contact. Hope that makes sense.

First screen from directory shows calls and clicks. We can ignore the impressions. It really has very little to do with what we are seeking here which is sales revenue.

Next we have the screen for the clicks package. It shows each click as a lead. I guess that is because they show it as a call. Once again, drilling all of this down is very important. Because if you were to use an industry standard number for leads to sales conversion it would be about 3% or 67 x .03  = 2. But because they show their leads as phone calls we will put it through that sort and search.

Last we wanted to show a simple pie chart they call traffic distribution. The only thing we wanted to point out here is the resale cost for Google clicks. Simply stated, this number is shocking. To be paying $27.22 per click in a service industry and have no say over the keywords selected is absurd. In a basic AdWord Express account established for another client in the same industry, the client was paying $8.58 per click. In a period of July 2014 this other client received 41 clicks and paid a fraction of the charges for the resold version. And they were all Google clicks that went straight to a quality landing page that converted into sales at almost 10%!! You can do that math. Cost = $351.86 for July. Sales = 4 x average customer in this case of $511.00. Not a bad deal. If the clicks had cost $27.22 or $1116.02, not such a good deal.

THIS IS DASHBOARD FOR THE YELLOW PAGES ONLINE DIRECTORY 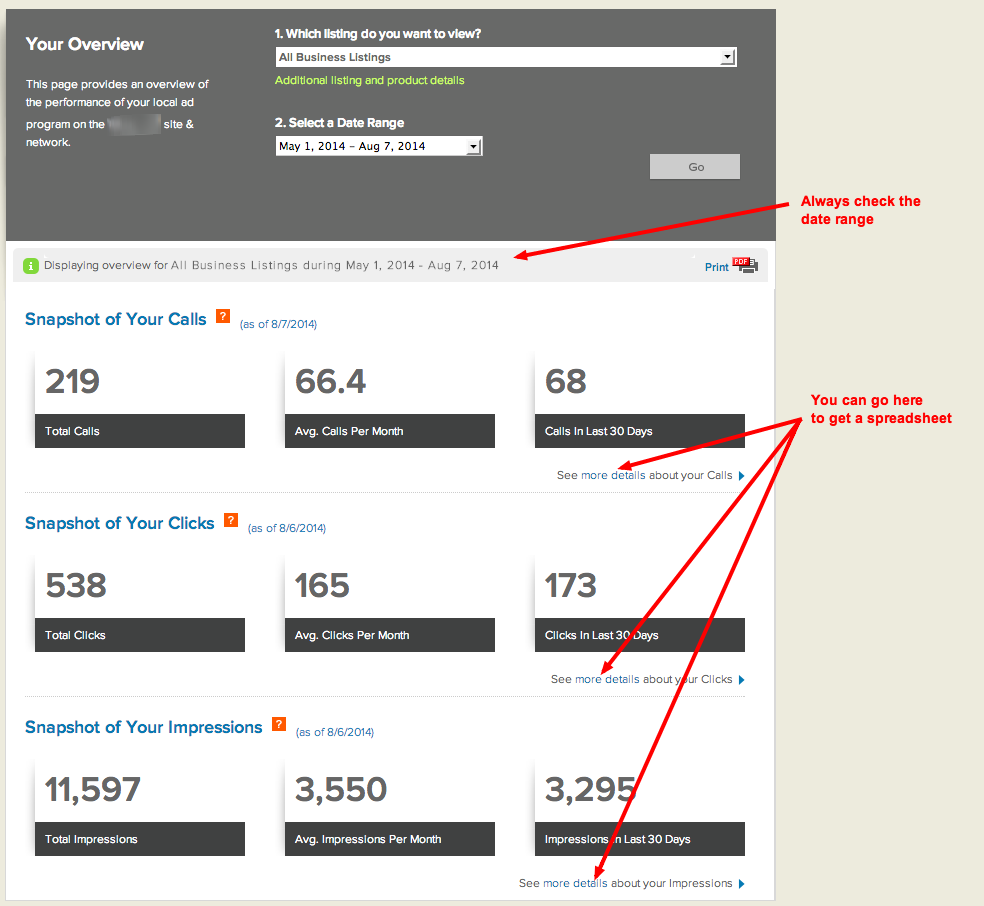 THIS IS THE DASHBOARD FOR CLICKS PROGRAM 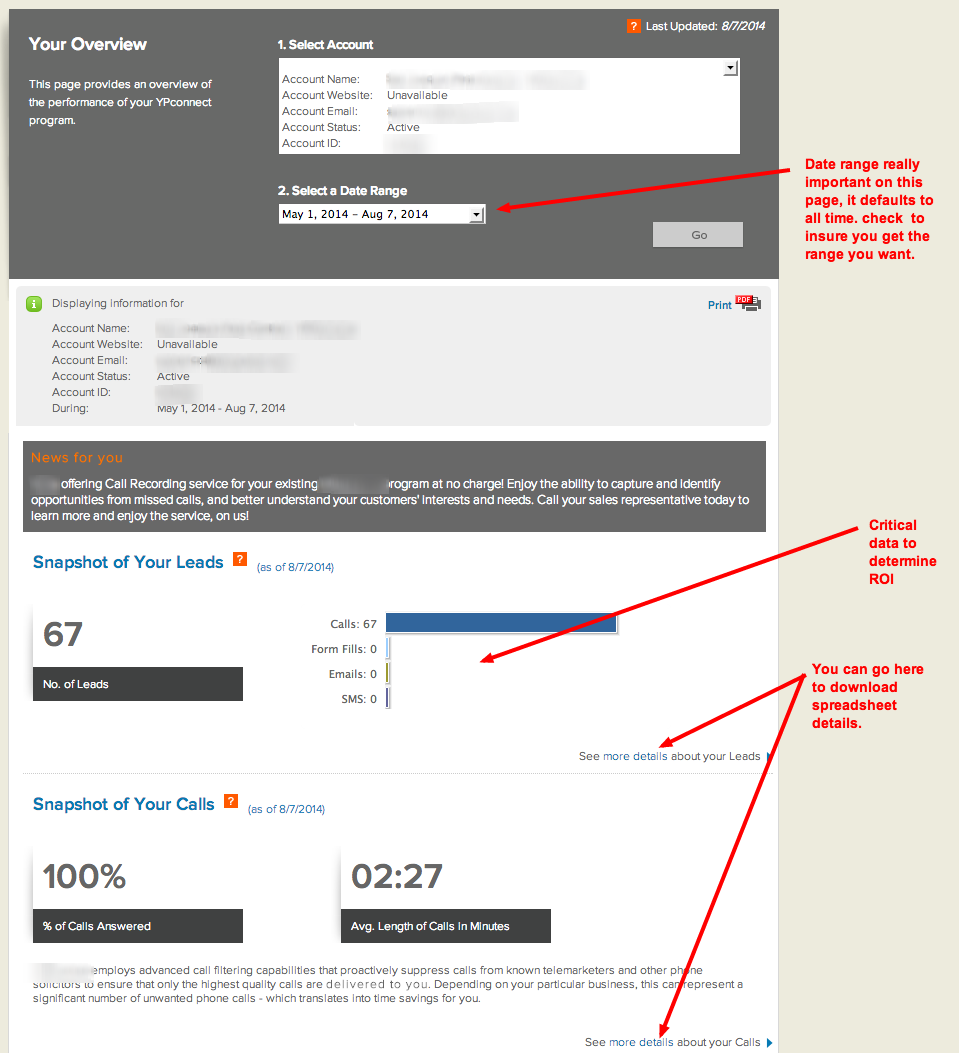 THIS IS DASHBOARD FOR TRAFFIC. THIS IS WHERE RE-SOLD GOOGLE CLICKS SHOW 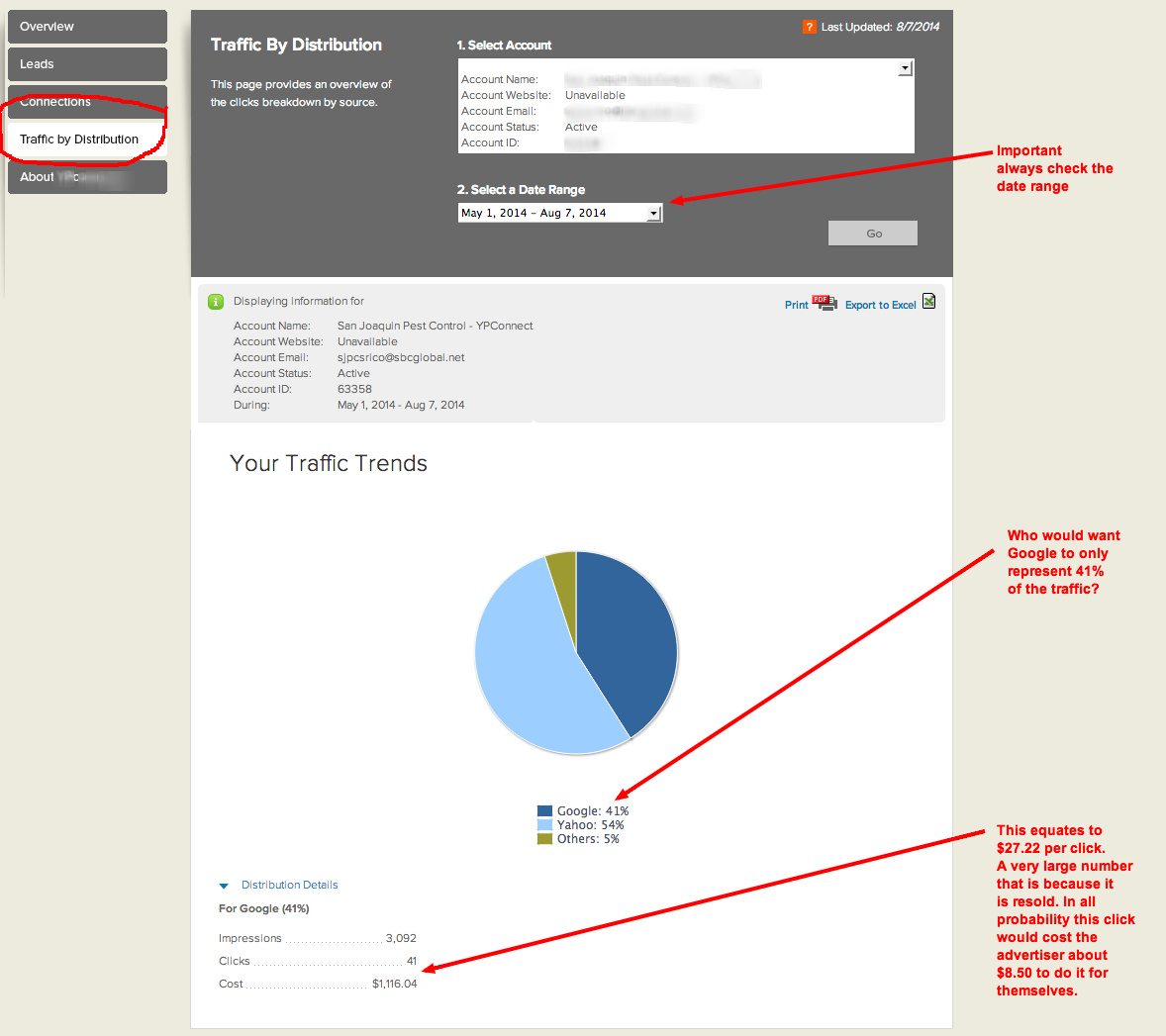 This is the client we placed a simple AdWords Express program for. We showed them how to set this up through thier own Google+ page. There really is no need to pay exhorbinant prices for AdWords. It's not a difficult process. Like everything else here, it's all about the value. It's worth taking the time to figure out rather than throw your money away wondering about it. 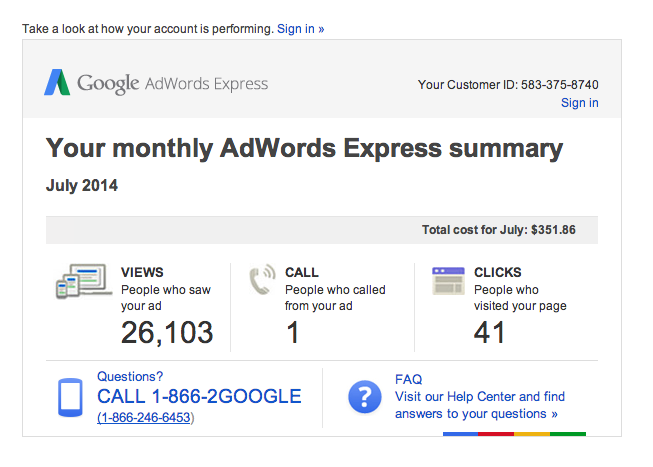 Now the point here is not to confuse you more than the YP companies do, but rather to give you some insight into the diligence required to monitor and manage this kind of an expense.

To simplify all of this requires no more than a little common sense, some basic math and voila we can get pretty darn close to what we made or did not make with this investment.

For print the best we can come up with over the period is as follows:

For the digital directory it shakes down like this:

So being as fair as reasonable with the numbers it really looks like for a basic expense of $24,834.00 for all advertising in May June and July. The best we can come up with for profit dollars is $7782.80.

You could try to say that for 24,834.00 in cost and raw sales of $25,941.00 that it's not a bad deal. We don't view it that way. The entire point of marketing and advertising is to create a profit for your money spent. If you spend a flat rate of $24,834.00 the idea is not to break even, the idea is to make a sizeable ROI. Or a profitable return on your investment. Break even is generally going to be raw sales of 3 to 1 or better. So in this case, the sales volume should really be somewhere in the neighborhood of $75,000.00 to start the discussion. Don't accept break even for your money. And failure is failure. If it doesn't make money it costs money!

Number 2) How do I break this cycle and move into the modern era of marketing and advertising?

Simply put, put the brakes on this train. Call your Sales Representiave and his/her manager today and let them know that you intend on dramatically reducing or cancelling all of this at the earliest time possible. Come to terms with the fact that you may have to increase budget to decrease budget. That means, if you are in a long term contract your new strategy and costs may overlap for a period of time while you reduce or cancel with the Yellow Page company.

Seek out information on content marketing, Inbound marketing, SEO, social media and many of the newer methods being used effectively and efficiently to generate a nice ROI. Contact a company or more than one company and let them give you an asessment on your overall marketing and advertising spend. Demand thoughtful and thorough consideration of your monies being spent. Make them demonstrate in an easy to understand fashion how you can consume all of the gobbly gook and marketing jargon to find out the two things you really, really want to know.

HOW MANY NEW CUSTOMERS DID I GAIN?

HOW MUCH PROFIT DOLLARS DID I MAKE?

Happy marketing. We included a link to our FREE eBook on Inbound. It's worth a look.