In a spin off from another yellow page blogger Mike Blumenthal, I decided to take a look at the fate of my home town phone book. I live in Northern California in an area known as the Tri-Valley. It is a nice suburb of the San Francisco Bay Area with good strong median income, high property values and a reasonably good economy.

There is no good reason why if the Yellow Pages works as an advertising medium that it would not be strong in this market and this economy. However, when the book arrived at my doorstep the other day, I could not help but notice that it could almost slip under the door it was so thin.

I sold Yellow Page advertising in this market in year’s past and it was always a thriving and growing market. We would routinely post gains in advertisers and revenues in the double digits. I compared the 2012 version to the 2014 version and was quite shocked to see that the yellow pages had shrunk by almost 20%. Wow! And what’s left is primarily national advertisers with a few of the old staple yellow page headings still populated.

I often end up in debates with bloggers and others over the value of the Yellow Pagess, the ROI, the old vs. young people, blah blah blah. But I have in the last two months retained large yellow page advertisers as clients. Forget what I say, they say it doesn’t work. And they have tracking numbers, secret codes in the ads, separate tracking URL’s to analyze. It just doesn’t work.

Then the yellow page salespeople resort to trickery. Just sign here and we will put you into the internet and get you lots of clicks and traffic. Well setting up a Google account and managing your own keyword advertising is easy folks. Today in a conversation with a dentist, his key words were declaring him a specialist in “childrens dentistry” which he was not. He has been trying for weeks to get somebody to stop the Google Adwords. The clicks he is paying for bring him traffic that isn’t what he wants and doesn’t convert to sales. Talk about irony!!

So when the time comes to get out of the yellow pages, just do it. Don’t think too hard and you don’t have to give the YP company your money to put somewhere else. Get out, re-evaluate and go inbound now.

The Yellow Pages joyride is over. It was a great product BG (before Google), now its just dying or dead. Don’t waste your money, find a better alternative and get acquainted with online, content driven best practices to build online equity for you, your company and your profitable future. 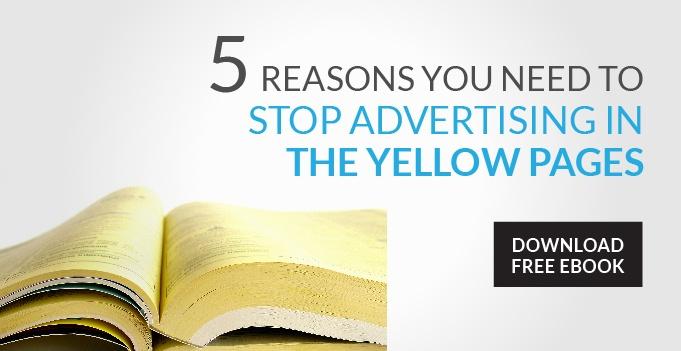